A Tale of Two Goats 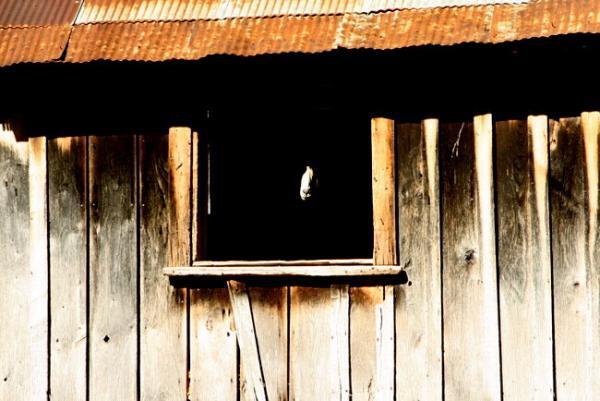 This is a story of two goats.

The first, pictured above, is a semi-feral remnant from the goat herd that used to populate the farm where we rent. He spooked us the first time we stumbled across him on a hike – bursting out from an abandoned farmhouse he has apparently claimed since the rest of his family was rounded up two years ago.

Exploring the house after he had left, we found scatological evidence of his habitation covering a corner of the top floor, one inch thick. Goats have no notion of indoor plumbing.

Now, we walk softly as we approach the house, hoping to catch a glimpse of him in the upstairs window where he keeps silent vigil, perhaps scanning the forest for his now auctioned brethren…or more likely, trying to see the coyotes before they see him.

The second goat mysteriously appeared among Jeremy’s four cows about a month ago. From the get-go, he was welcomed as a member of the bovine species – and from observing him, one would assume he doesn’t know the difference between himself and the cows. He spends every waking and sleeping hour with them; and the cows in turn, are devoted to him. Turns out he belongs to a cow herder down the road, who has no desire to see him returned. It seems he ran one of his cows to death – just kept pestering the poor animal until its heart gave out. But for some reason, his behavior with Jerm’s cows is totally altered. He’s a changed goat.

To be brief, if goats can change, so can people. It takes time, attention, and often a different environment, but it can be done. And it is exactly what Whetstone will do.