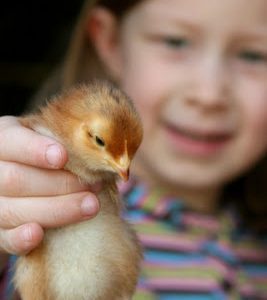 This spring, we mail-ordered 20 chicks.  For those unfamiliar with this process, they actually come in a box, with holes for them to breathe of course.  (In the spring, the West Plains Post Office has so many of these boxes that the entire place chirps!)  We ordered these chicks for a few reasons.  One is that nothing tastes quite a like a farm-fresh egg.  Another is that our farm house rental has a veritable chicken coup penthouse, and it seems a shame to let it go vacant.  Most important, however, is that we home school, and taking care of animals provides an excellent opportunity for us to teach responsibility and attentiveness to nature and its many lessons.  As it turns out, many of those lessons have been unexpected.

My wife and I are city folk, who are making the transition to the country life, and loving almost every minute of it by the way.  I say “almost” because there are some things that city folk, for all their book learnin’ and web surfin’ just can’t learn without making silly and sometimes tragic mistakes.   Of these 20 chickens, 13 are now (God rest their souls) in the mistake category.