Chimpanzee off the Square 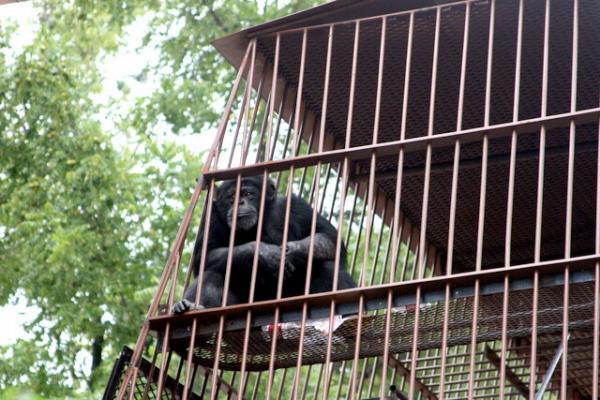 There is a chimpanzee off the main square in downtown West Plains.  You heard right.  A chimpanzee.  Actually, there are two.  There are two chimpanzees that reside in a giant outdoor cage attached to a Victorian painted lady.  It’s quite a spectacle.

You should hear them during a storm.  It’s like something out of Julius Caesar, with strange and unnatural sounds portending some great and future danger.  The first time I heard them during a tornado warning, the dream-like hooting mixed with the siren sound echoing off the brick buildings downtown ran chills down my spine.

I am not going to comment on the general practice of owning a chimpanzee for a pet.  This may be a case of to each his own…as long as the chimpanzees stay behind bars and relatively quiet when atmospheric conditions allow.  And to the owner’s credit, from my vantage point in an office right across the street, this has been the case.

From what I have gleaned by reading news accounts, there was a point several years ago when a third monkey had to be removed.  Apparently, he had an issue with another male chimp.  (It was a guy thing.)  News accounts also made mention of the extreme difficulty of placing chimps in sanctuaries, which are overloaded and expensive.  One sanctuary in Florida agreed to take this third chimp if the owner donated 200,000 .  That’s about half of Whetstone’s annual operating budget!

$200,000 would pay the tuition of 5 boys.  $200,000 would pay for an entire year of eating, sleeping, schooling, hiking, fishing, farming, counseling, mentoring and more – ultimately contributing to the reformation and restoration of 5 young men to their right minds.

God has given mankind stewardship over all creation – chimpanzees and troubled boys included.