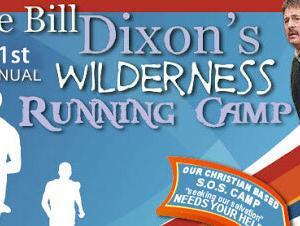 At breakfast this morning, Brandon Maxwell and I met with Joe Bill Dixon, one of Whetstone’s founding board members.

If you lived in West Plains, I would not have to write anything else.  I could end this entry right now, and you would call up our office to ask how you could be involved with something that Coach Dixon endorsed.   You see, Joe Bill is a living-legend is these parts;  indeed, to say his name is to invoke hush, awe and knowing nods of reverent heads.   He has that kind of reputation.

>As a boys and girls track/cross-country coach, he has won 25 state titles in the last 31 years.  And he’s still going.  There’s just no quit in Joe Bill.  In the fall, it’s cross country; in the spring, it’s track.   During the summer, teams come from all over the region to attend the many sessions of his Wilderness Running Camp. (see above link to his website)  His runners are a familiar sight to anyone who is up before dawn, as they canvass the entire city on their morning runs all year long.

But more than being a cross country coach, Joe Bill is a mentor.  He teaches his runners about “running the good race,” and he is not ashamed of the gospel of Jesus.   Each step of the way, he reminds his kids that the people behind them, beside them, and in front of them are not the enemy.  The real enemy is Satan, and the real finish line, Heaven. His homespun homilies are as much a part of his program as his running techniques.

To have Coach Dixon on our board is great blessing, and his support of our program is worth more than words can express.   We seek to follow in his footsteps – teaching the value of hard work, focused training, and mental toughness.