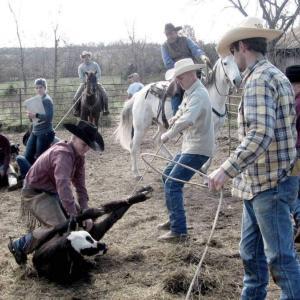 The summer before we opened up in 2011, we spent a good deal of time raising money. (That’s a funny phrase isn’t it?  Like money grows in a vegetable garden, or can be harvested like catfish in a stock pond.)

I remember one event in particular.  It was hot.  We arrived early to set up our booth, which included a banner, a table blanketed with the usual promotional items, and few games for the ninos, one of which happened to be a square bale stuck with the russet head of rubber steer, accompanied by a rope (it’s not a “lasso” by the way) to practice roping skills.  A bit of pretend play, if you will.

Now, we’re not the world’s best cowboys.  Still, we try to play the part.  We do run a boys ranch, for Pete’s sake.

So we spent time practicing our throws and teaching a few small boys how to do the same.  (No one needed to know that kind of thing didn’t really happen at our ranch.  Part of the vision, yes.  Romanticism bordering on false advertising, maybe.  But you can do a lot under the wide umbrella of “milieu.”)

Well, I doubt we raised a dime that day, when you account for the expense of having to replace all the whetstones we gave away.  (It’s been a very popular metaphor!)  But we did raise awareness, and lent our support to an organization that raises millions of dollars each year for organizations like ours.

But what I remember most is a stray comment made by a random visitor.

Uh…yeah.  I guess so.  I wouldn’t use those words exactly, but sure.

I was respectful of course, thanking them for their interest before they passed to the next booth, toting a brand new complimentary whetstone.

However, the more time passed, the more that description started to bother me.  To be sure, much of the misunderstanding had nothing to do with us…although our logo does feature a silhouetted cowboy figure alongside a boy on horse.  Based purely on the artwork, Horsey Farm is not a bad description.

But it doesn’t exactly capture what we do on a daily basis.  In fact, our current insurance policy doesn’t even allow us to put a boy on a horse.  It’s just too expensive.

Okay, okay.  It’s a symbol.  I get that.  But I mean, c’mon man.  A little bit of verisimilitude would be nice.

Which is why it felt so good to send the boys to an honest-to-goodness, cow branding last weekend.  They got to see the sights, hear the sounds, smell the smells…taste the Rocky Mountain Oysters.

They wore their Wrangler shirts and cowboys boots.  They wrestled and pinned a calf to the ground.  Dodged the horse hooves. Administered the shots and survived to tell the tale – escaping unscathed but for the manure and slightly bruised egos from all the berating that comes along with being a greenhorn trying to find his place at such a ceremony.  (We’re not worthy. We’re not worthy.)

For a few glorious hours on a Saturday afternoon at Clear Creek Ranch, our guys got to be cowboys.  Are they changed men as a result?  Hardly.

Did they experience something that will stick with them a lot longer than the foul-smelling mud that covered their Carhartts?  You betcha.

Some badly needed confidence.  Something to make them hold their heads a little higher, their chests swell with a healthy sense of accomplishment.

And if someone wants to call that a “Horsey Farm,” I guess that’s just fine with me. 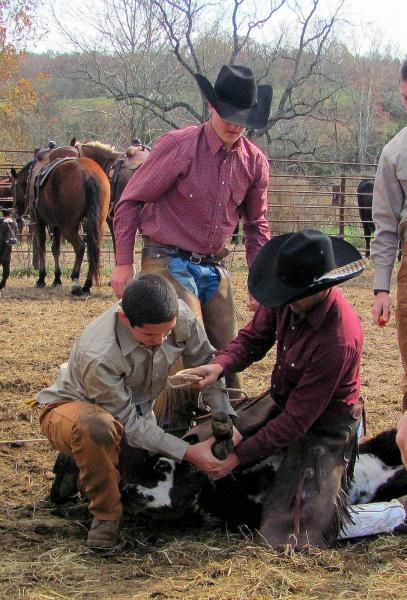