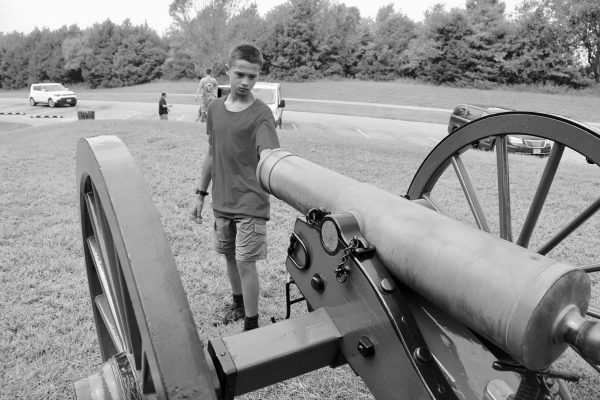 As a history buff, I am fascinated by the American Civil War.  The strategy, the human drama, the movies and books, the stark and memorable war photography.

I especially like all those daguerreotypes with sepia tones and the stoic expressions necessary when one had to sit still for so long in uncomfortable clothing.=

But the reality of living through our country’s great conflict between 1861 and 1865 was nothing short of harrowing; and there was nothing really glorious about it.

We got a good dose of that reality yesterday as 8 boys and 4 adults toured Wilson’s Creek National Battlefield, just outside of Springfield, Missouri.

If you don’t know, as I didn’t before visiting, the battle at Wilson’s Creek was the second of the Civil War. It is notable for several reasons, but two stand out.

The first is that it featured the first death of an officer in a field of battle, Brigadier General Nathaniel Lyon.

The second is that General Lyon’s leadership and eventual sacrifice in a battle against overwhelming odds is credited with preventing the entire state of Missouri from falling into the hands of the Confederacy. Imagine if St. Louis had been overtaken, and control of the Mississippi fell into Jefferson Davis’s hands.

As we drove around this National Park, meticulously maintained by the Park Service, there were many sobering reminders of that ugly and heroic battle.

A quiet house that served as a field hospital for hundreds of amputations that day, its empty rooms still echoing with silent screams, its perfectly groomed front lawn once strewn with dying soldiers in the shade of its lush trees.

A breezy and idyllic hill looking down the barrels of two Howitzer canons that once boomed with earsplitting explosions and clouds of smoke.=

We need to be reminded that these things happened. Brother fought against brother. Sister against sister. Parent against child. Americans didn’t just disagree; they killed each other.

Martin Luther King, Jr. once said, “We must live together as brothers; or perish together as fools.”

Let’s remember this. Repeat it with me.

I’m not saying we shouldn’t stand against evil. We most definitely should. Wars to end oppression and tyranny must be waged constantly. General Lyon did not die in vain.

But I think we can all admit that we need to do a better job of picking our battles.

Do we really need to say such nasty things on social media about people we know nothing about?

Why is it that people are leaving the food service industry in such droves? It’s not the low pay anymore. Restaurants are trying all kinds of things to attract employees. It’s complicated, I know, but can’t we just agree that many of us have lost our ability to, as I heard one commentator say, “human” again?

It’s not really that big of a deal that I didn’t get the two ketchups I asked for at Chick-Fil-A. Deal with it, Axel.

Whetstone Boys Ranch has several up-coming graduations, praise the Lord. It’s been a long journey for both of these boys and their families, but if there is one common denominator, it’s that they have learned how to pick their battles.

Some things aren’t worth fighting for. Some things are. Mere conflict is not a sign of failure. It’s actually one indicator of a healthy relationship.

But we have to stay on guard for the type of division the devil likes to stir up. He loves to have us sweat the small stuff. He loves nothing better than to destroy relationship. That’s what he did in the Garden of Eden, and that’s what he’ll continue to do until he’s thrown in the lake of fire at Armageddon.

Let’s not give him the satisfaction.