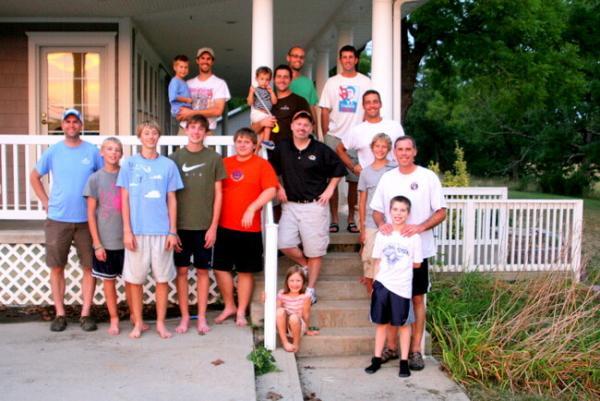 The last weekend of July, we had a good old fashioned barn-raising event at the Ranch.  Eight men and six boys from Forum Christian in Columbia, Missouri, swept, scraped, trimmed, weed-whacked, and power washed a goodly portion of the 11,000 square foot residence and accompanying acreage.  It needed a bit of TLC, and how better can a bunch of men show tender, love and affection than with a large collection of power tools!

I was put in charge of a crew of 4 boys and tasked with storing or disposing of the many items left on the premises.  Ping pong table?  Keep.  Bucket of rusty nails?  Pitch.  Sledge hammer?  Keep.  Old pair of tennis shoes?  Pitch.  After several sweaty hours of pulling junk out of the basement (aka future school room), we started to develop an identity and a sense of camaraderie; we even came up with a name for ourselves:  “The Junk Bunch.”  Ours was the grimiest job, but after we had our first layer of dust and dirt caked on, we started to like it.  What boy doesn’t like to get dirty from head to toe?

The other work crews focused on pruning trees, trimming bushes, weed whacking, and power spraying the vinyl porch and siding.  They all probably felt like we did, with their own special reasons for pride in the valuable and hard work they were accomplishing.  And at the end of the long Saturday, we all deserved to feel proud of what we had done.  Thanks to the guys from Forum Christian, Whetstone Boys Ranch already looks and feels like a new place.

Ronald Reagan liked to say that the “outside of a horse is good for the inside of a man.”  I don’t think he invented this phrase, but it’s a good one.  In our case, I’d say the outside of Whetstone’s “house” will be good for the inside of our boys.  We want our boys to feel proud of being at Whetstone.  I echo the comment of a lady at a recent presentation when she said that our biggest problem might be getting our boys to leave.  This could be a real concern, and in all seriousness, we will have to think long and hard about the best way to transition our boys from the haven of Whetstone to the harsh reality of the worlds they come from.

We think that if a job is worth doing, it’s worth doing well.  And from the look of the ranch after this weekend, the guys from Faith Forum obviously agree.

Pray that God will send us more workers like them.